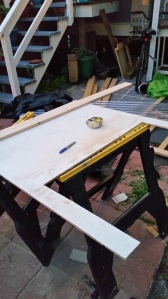 I also did not take nearly enough pictures.

Here I cut the hole for the nesting box

out of the left wall siding. The box is 28 inches wide, allowing for two nesting boxes at 14 inches each. The box starts at about 18 inches tall, and descends to 15 as it comes away from the coop, creating a sloped roof.

Again, I’m obsessed with being able to clean this coop. So the roof of the nesting box should be able to open and allow the easy harvest of eggs. But the box should also come open so that it can be easily swept out. I installed the front of the box on hinges so that it will easily open to allow me to sweep it out. I also, during this process, added the coop flooring cover. This is the same pond liner used on the

roof, attached using the same method of liquid nail as glue. The floor of the box is as close to even as I could make it, and the smooth fabric across the two areas removes the crevices that stuff can get stuck in.

I didn’t get to the roof today, since I did not have a piece of siding or plywood left that was big enough.

Two things, right off, I would do differently if I had to do it again. One, there was nothing for me to brace the box on, which was frustrating and if anybody leans any hard weight onto the box will be a problem. It will hold a chicken, but not a human leaning on it. Two, I  should have cut the floor to include the box, even if it meant another piece of plywood to do the roof. Having a solid floor would have been worth it. The pond liner helps remove the problem, but a solid piece would have been better.